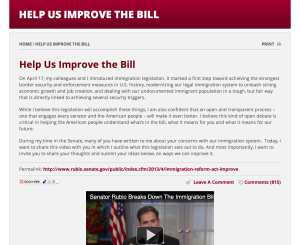 Senator Rubio has opened up a dialogue on his new immigration reform website inviting public input.

TAKE ACTION by telling Rubio what true immigration reform looks like and add your voice to the millions who support this effort!

CLICK HERE TO TAKE ACTION AND LEAVE A MESSAGE IN SUPPORT OF CIR NOW!

Remember what WE WANT for ALL workers: