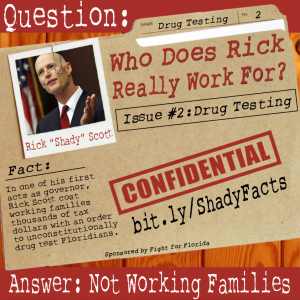 It will probably come as no surprise that Governor Rick Scott says one thing but means another. After all, he’s a Tallahassee politician. But his support of drug testing recipients of taxpayer assistance rises above his ordinary hypocrisy. He, his political cronies and some big businesses have all received taxpayer funds, all without a single drug test. One might be tempted to accuse the Governor of trying to avoid detection by casting the public’s eyes in another direction.

Rick did what now? It all started back in July 2011 when the state of Florida enacted a law requiring adults applying for welfare assistance to undergo drug screening: Saying it was “unfair for Florida taxpayers to subsidize drug addiction,” Gov. Rick Scott signed the legislation.

Under the law, the Florida Department of Children and Family Services required drug tests on adults applying to the federal Temporary Assistance for Needy Families (TANF) program. The recipients would be responsible for the cost of the screening (about $30 dollars), which they would recoup in their assistance if they passed. Applicants who tested positive were barred from receiving benefits for a year although another person could apply for benefits on behalf of any children.

Well that sounds illegal…and it was. Enforcement of the Florida law was temporarily halted by a federal judge after the American Civil Liberties Union filed suit[2] on behalf of a Florida resident that was denied benefits when he refused to take a drug test. Judge Mary Scriven issued the temporary injunction against the state[3], writing in a 37-page [4]order that the law could violate the Constitution’s Fourth Amendment ban on illegal search and seizure. A U.S. District Judge upheld that ruling and struck down the Florida drug testing law for welfare recipients, saying that it violated the constitutional protection against unreasonable searches.

During the time the law was in effect, about 2.6 percent[5] of recipients tested positive for illegal drugs, mostly for marijuana, according to the court documents. The failure rate was well below that of the general population. The U.S. Department of Health and Human Services found in a 2009 survey that about 8.7 percent of the population aged 12 or older had used illicit drugs in the previous month.

Undaunted… He followed up that bill with an executive order[6] requiring drug testing of all 85,000 state employees as well as a pre-testing of prospective job applicants in agencies under his control. The U.S. Circuit Court of Appeals[7] was equally undaunted when they ruled that Scott’s executive order making consent to suspicionless drug testing a condition of employment was unconstitutional as well as testing of state employees without a threat to public safety or suspicion of drug use.

Gov. Rick Scott and his drug testing policies became the unwitting target of Jon Stewart’s “Daily Show” when a reporter for the show broke into budget news conference and asked the governor to “pee into this cup.” http://youtu.be/SLIV7ucAhaw The entire episode can be viewed here: http://thedailyshow.cc.com/videos/vra301/poor-pee-ple

Once again, Florida is the butt of the national jokes.

Who does Rick really work for? When looking to who benefited from this law, one has only to look to Gov. Scott. With ties to the drug testing company, Solantic,[8] the state was effectively being forced to pay for 11.5 gallons of drug-free urine every month, to the tune of around $34,000.[9] The testing plan, which was expected to cost $187 million by some analysts’ estimates, could have cost taxpayers even more in the long run had they been able to test state employees for no reason. Add to that, those who received taxpayer funds but who did not have to take drug tests and the picture gets even clearer – big corporations, professional politicians and the Governor himself all benefited from the unequal treatment of the law.