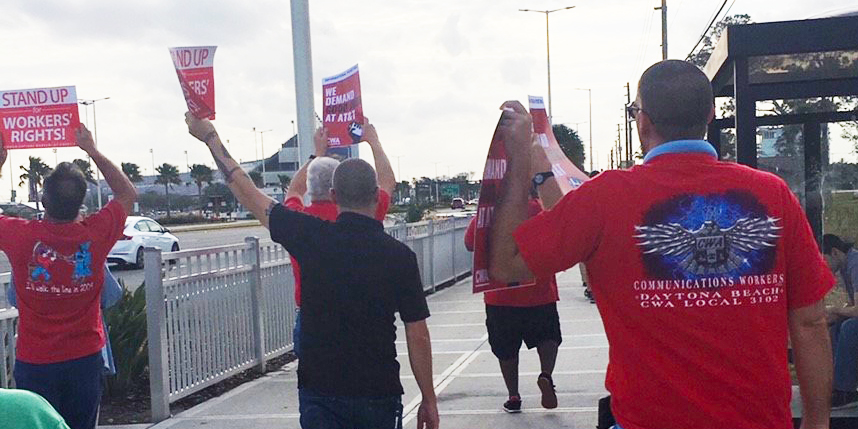 With contract bargaining beginning in early February 2018, Communication Workers of America from AT&T Mobility in District 3, AT&T Midwest, and Legacy AT&T held informational pickets at many locations across the country.

Philip Farruggio, President of CWA Local 3102, stated “the reason we conducted a mobilization effort in front of that AT&T corporate retail store was multifaceted.

First and foremost, AT&T mobility is getting ready to start bargaining a new contract in District 3, which makes up 9 states in the Southeast. We have a message we wanted to convey not only to the company, but to the CWA bargaining team which is that we are united.”

President Farruggio continued saying that “we deserve a fair contract. We want that message conveyed. We want the bargaining team to know that we are behind them. We want the company to know that our membership is prepared to mobilize and to strike, if necessary.”

“AT&T has also announced roughly 1,600 layoffs of its technicians nationwide, around 290 from the Southeast,” stated President Farruggio, “even after the big corporate tax cuts were announced which was supposed to help create jobs. We will continue these mobilization efforts throughout the bargaining process for as long as it takes to let the company know that we will not go quietly into the night”

As many remember, the moment President Trump signed huge corporate tax cuts into law, AT&T announced that they would be giving out $1000-dollar bonuses to employees ($3000 short of Trump’s tax cut promise to working people), generate 7000 new good paying jobs, and invest over $1 billion dollars back into its infrastructure.

Many of these 7000 “new jobs” AT&T claims it will be creating are going to come from closing and/or moving call centers (without allowing current employees to relocate to these new centers),

CWA released a statement saying what does “AT&T Investing $1 Billion dollars mean to AT&T employees, when you are eliminating most of the Unionized work force to suite bigger profits. When a CEO can make a salary 350 times higher than its average employees, and the company continually profits Billions, how does AT&T claim to surplus its employees, due to economic reasoning?”