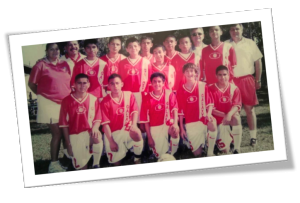 Facing an uncertain future in an unstable country, Irving Castillo and his wife decided to take a leap of faith for their safety and their children’s future.  “Although my family was politically connected, there was always the stress of knowing it could change at any moment.  We could have had a better than average life in Guatemala but chose the United States because we wanted to raise our family in a safe place.  Leaving my Country was not easy, but as a young man, with many ideas and dreams, a country can be small no matter how big the territory.  I was newly married, I wanted to be part of something big and great, and the United States gave hope to my dreams.  Dreams of forging my own destiny free of the judgments based upon association with my family.”

So, Castillo brought his big ideas and dreams to the United States.  He and his wife became US citizens. He became an insulator and joined the union. They raised their three children here and just welcomed their first grandchild.  His adopted country has been good to him and his family but he has seen other immigrants struggle to find a job and provide for their families.  He has seen families torn apart.  Friends who must take lower pay and endure abuse from unscrupulous employers exploiting their labor all because of their legal status.

“When I came here, I didn’t want a lot; just the opportunity to have a decent life, free from fear and instability.  The opportunity to work hard, provide for my family honestly and retire with dignity,” Castillo explained.  Determined to give back to the community that has provided him with so many opportunities, Irving volunteers his time to coach soccer for the Rural Youth Soccer Association, an organization he has helped build by serving as its president and serves in a leadership position with his union.   “As Floridians, we do our part to contribute to our communities, and we all benefit from having hardworking new immigrants as contributing members of our communities.  That is why we need commonsense immigration reform.  America works best when we all do our part and work together as one nation, indivisible and strong.  God Bless America.”