“When I hear a politician say that we have to raise the minimum wage so working families can make ends meet, I cringe…” – Governor Rick Scott

Scott Maxwell, of the Orlando Sentinel, put it quite plainly when he wrote, “If you’re still arguing that lowering corporate-tax rates and increasing corporate handouts is a formula for success, you’re delusional….Incentives are also, of course, inherently unfair. Politicians award perks to some companies and not others. They breed favoritism and cronyism. And they fly in the face of free-market capitalism — which is why many principled conservatives dislike them.”[i] He based this on the fact that Florida’s economy in terms of wages, growth and standard of living lags the nation.

It should not be surprising that trends in hourly wage growth have profound consequences for American living standards. After all, the vast majority of Americans rely on their paychecks to make ends meet.[vi] 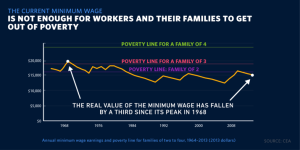 According to a report by the Economic Policy Institute, “Raising the minimum wage would help reverse the ongoing erosion of wages that has contributed significantly to growing income inequality. At the same time, it would provide a modest stimulus to the entire economy, as increased wages would lead to increased consumer spending, which would contribute to GDP growth and modest employment gains.”[vii]

If raising the minimum wage lifts families out of poverty and off public assistance while at the same time providing economic stimulus, it is hard to understand why politicians who claim to be focused on the economy have not embraced the policy. In an email, Governor Scott, the “jobs” governor said, “When I hear a politician say that we have to raise the minimum wage so working families can make ends meet, I cringe, because I know that statement is a lie. Even if we did raise the minimum wage, working families will still not be able to make ends meet on those jobs. We need good jobs that lead to good careers for our families and that’s what I am focused on.[viii]” So where are the good jobs? Who is lying now?

During his tenure, Scott has done an excellent job of increasing the number of minimum and low wage jobs and a good job of giving incentives and tax breaks to corporations but he has yet to deliver on his “good jobs” promise. According to the study by Florida International University’s Research Institute on Social and Economic Policy, the three industries that account for 63 percent of all minimum-wage jobs in Florida — hospitality, retail and healthcare — have also been leading the recovery. Meanwhile, two sources of better-paying jobs — construction and government — have been in retreat during the recovery.[ix]

Additionally, according to a Florida Center for Investigative Reporting study, from July 2010 to July 2011, the largest number of new jobs created in the state came in the leisure and hospitality industry, which pays average annual wages of $21,448.[x] That compares to $41,750 for all Florida industries, according to statistics from the state’s Agency for Workforce Innovation. Along with hotel workers, Florida’s job-creation machine is also making administration and waste management services — with jobs such as secretaries, office administrators, janitors and office cleaners — one of the three fastest-growing industries. Between January and July 2011, the state added about 14,000 of these jobs. Meanwhile, jobs with benefits in higher-paying industries such as information, finance and insurance, wholesale trade, along with federal, state and local government, all saw negative growth.[xi]

The surge in tourism and cleaning jobs doesn’t mean those workers are getting paid any better. The bottom 20 percent of earners in Florida have seen their wages actually drop, according to the FIU study, while they went up modestly for the state’s top 20 percent of earners.[xii]

This trend hasn’t gone unnoticed by the public either who have time and again voiced their support for increasing the minimum wage. According to Denise Diaz the Director of Central Florida Jobs With Justice, the “groundswell of public support for a higher minimum wage is real and lobbyists for the fast food industry and retail corporations are at the forefront of attempts to stop it. As some states and local governments take initiative to raise wages, we are seeing a national conversation regarding the growing industry of low-wage service work and Florida cannot be left behind. Now more than ever, workers are not living paycheck to paycheck but instead living hour to hour with unstable schedules and poverty wages.”

Pay, for the vast majority of Floridians, has stayed flat or declined, even though productivity and earnings at the top are escalating. Floridians are working harder, more productively, and with more education than ever, but are treading water, as an enormous and ever-increasing share of income growth goes to corporate profits and executive pay.

As wages decline so does purchasing power which leads to a decrease in living standards. Because there is a clear connection between wages and living standards any efforts to alleviate poverty and get families back on their feet and off public assistance will be extraordinarily difficult without addressing wage growth.

This problem has its roots in policies that increasingly favor employers at the expense of workers. According to economists, (see Mishel et al. 2012 and Bivens 2011) a number of influences can help explain why the wages of the vast majority have grown more slowly than economy-wide productivity. The major influences include:

By themselves, none of these policies has the power to move the needle on overall wage trends. However, as a group, they have measurable effects. Corporate bankrolled organizations like Americans for Prosperity spend much effort and money at the federal and state levels to pursue these policies (Lafer 2013). 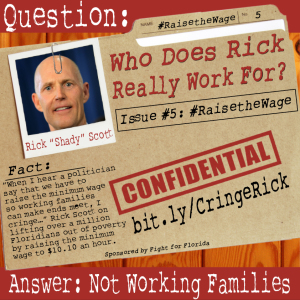 Who Does Rick Really Work For?

At this point in the series, it probably doesn’t come as a surprise that those same organizations fighting against this fundamental issue, that would dramatically improve the lives of Florida’s working people, have contributed to Rick Scott’s campaign for governor. Millions of dollars have been spent by the Koch brothers, their corporations, their kin and their lap dog, American’s for Prosperity. Making us all cringe a little more.

[vii] Raising the federal minimum wage to $10.10 would give working families, and the overall economy, a much-needed boost. David Cooper and Doug Hall, March 13, 2013, http://www.epi.org/publication/bp357-federal-minimum-wage-increase/

[xiii] Raising the federal minimum wage to $10.10 would give working families, and the overall economy, a much-needed boost. David Cooper and Doug Hall, March 13, 2013, http://www.epi.org/publication/bp357-federal-minimum-wage-increase/