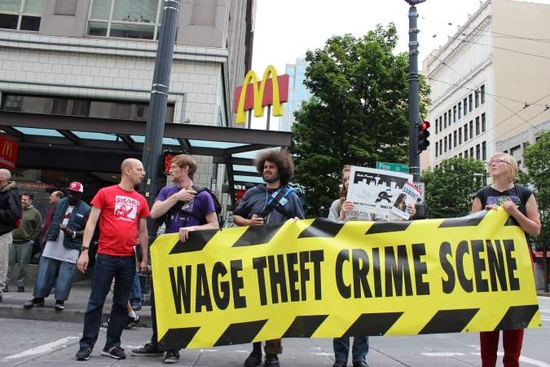 Governor Scott has made Florida a haven for unscrupulous companies all in the guise of making Florida “business friendly”. It’s probably no surprise that the industries that have provided the bulk of Scott’s job recovery numbers (restaurant and lodging, retail and tourism) also pay the lowest wages, have the fewest benefits and are filled with employers who steal from their employees.

Taking Your Money: Wage theft, defined as underpayment or non-payment of wages earned, is a growing epidemic in Florida and around the country. For example, if an employer notices that a cash register is short and takes the money out of their employees’ wages, that’s wage theft. Other examples range from paying less than minimum wage, not paying workers overtime, not allowing workers to take meal and rest breaks, or taking workers’ tips.

Rick Scott’s Florida: The US Department of Labor has identified Florida as one of the worst states when it comes to wage theft, recording over 9,000 cases totaling over $28 million in lost wages in a period between 2008 and 2011. Further, a comprehensive study by the Research Institute on Social and Economic Policy at Florida International University indicates that this is the tip of the iceberg and that actual cases could be as high as 300 percent more.[1] These lost wages mean less money in local economies and more families on taxpayer assistance.[2]

Since the Jeb Bush administration and the Florida Legislature dissolved the State Department of Labor[3] without providing any statewide solution, local governments have begun exploring local solutions through city or county ordinances. Miami-Dade County led the way in implementing a local ordinance to help the victims of wage theft. Since its enactment, almost $600,000 in wages has been recovered for 471 workers through the mediation process and 411 administrative hearings have yielded almost $1 million in lost wages for aggrieved workers.[4] Similarly, Alachua[5], Broward[6] and Palm Beach[7] Counties also instituted its own policies while other counties are looking into it. Over 31% of Florida’s workers now live in counties that have established local Wage Recovery programs.

Apparently paying your employees the wages they have earned amounts to being “unfriendly” to businesses that don’t want to pay employees. Keeping employees’ wages also puts these businesses at a competitive advantage compared to business that do not. 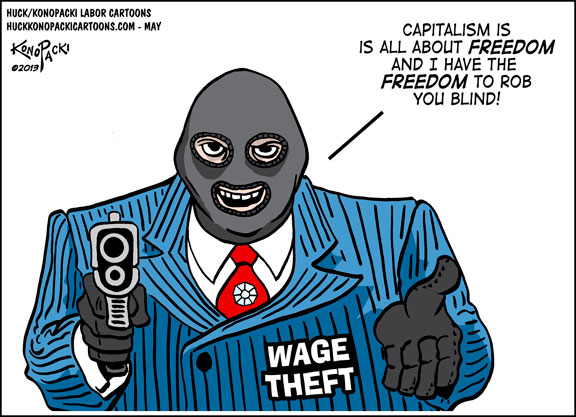 Meet The Wage Thieves: Major corporations like McDonalds[8] and Subway[9] have been charged with stealing hundreds of thousands of dollars from their workers in the 2014. In our state, championing this issue year after year is the Florida Retail Federation[10] who represents some of the worst offenders – Walmart, Macy’s, Publix and Office Depot. Each year, the Florida Retail Federation urges the Legislature to consider wage theft pre-emption ordinances, putting a roadblock for victims of wage theft to recover their stolen wages.[11] The FRF has made upwards of $2 BILLION dollars in campaign contributions from 2004-2012. 77 percent of which went to Republicans, including Scott. [12]

Who Does Rick Really Work For? When the FRF endorsed Scott for reelection they praised him by saying that he had helped retailers create jobs.[13]

Instead of protecting workers from wage theft, the FRF and Rick Scott want to preempt local control and prevent workers from receiving wages owed to them.[14] And they have spent hundreds of thousands of dollars to do so.

Keep in mind, the Florida Retail Federation’s money comes from its members like Macy’s, Play it Again Sports and the others we’ve mentioned. So the $600,000+ courtesy of FRF is actually coming from all their major corporate sponsors who use organizations, like FRF, to shield their shady business tactics from the public.[15] Rick Scott’s friends are not the friends of working families. So, while he has made Florida very friendly for them, he has done so at the expense of Floridians.