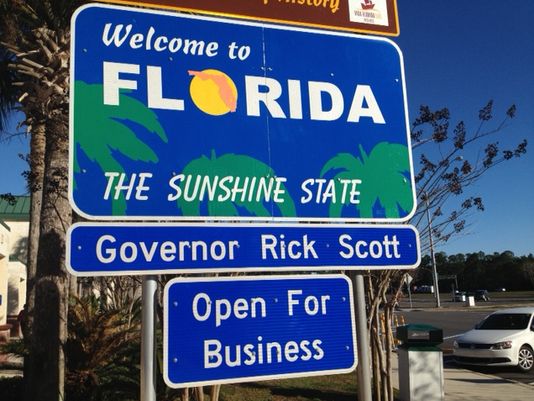 Who does Rick really work for?: That’s a good question, because it’s really tough for Florida’s working families to trust Rick’s flipping positions on healthcare policy. The Governor who’s former private company saw the largest Medicare fraud in the nations history, [i] has spent most of his time in office convincing the taxpayers that over 1 million Floridians should continue living without healthcare, unless there is a private option. Welcome to ScottCare, where the well-being of Florida’s working families is always “open for business.”

“Just doesn’t make any sense”: Riding the Tea Party wave of 2010, Rick Scott launched into office as a staunch opponent to the president’s Affordable Care Act (ACA). Before even running for Governor, in 2009 Scott spent $5 million to form a private organization to oppose the law.[ii] Even after the Supreme Court upheld the law in 2012, Scott remained dedicated to his ideological position of for-profit healthcare by stating that Florida would not expand Medicaid to those in need because it “just doesn’t make any sense.”[iii] What really didn’t make any sense is why the pro-business model healthcare governor would conveniently flip on his position just one year before his campaign for reelection.

The Miami Herald asked the same question and dug deeper to show that his actions as governor where in contradiction to his new position on healthcare expansion:

The Basics: Medicaid is the largest source of funding for medical and health-related services for people with low income in the United States.[v] ACA expanded whom Medicaid could cover and the Supreme Court ruled that that expansion was an option for the states.

Because Governor Scott is opposed on ideological grounds, he elected NOT to expand the program. He said it was because he was concerned about its impact on the state budget. This purely partisan driven policy decision has deeply hurt Florida.

If Florida had adopted the expansion, approximately 1 million more Floridians would be eligible for Medicaid[vi]. That’s a shocking number. For poor and near-poor Floridians in particular, purchasing health care coverage is rarely a viable option, and although many are working, few have access to meaningful coverage through their employer. When they become ill, they utilize costly emergency rooms at a higher rate for both non-emergency and emergency complaints. The ACA addresses that reality by increasing the income limit for Medicaid for most non-elderly adults to 138 percent of the federal poverty level ($26,344 for a family of three in 2012).[vii]

So who foots the bill? The Governor claims that Florida taxpayers will shoulder the majority of the costs associated with expansion. However, it appears that that assertion is grounded in a number of inaccurate assumptions. It wrongly assumes that all of the unenrolled Floridians who are currently eligible would suddenly enroll en masse, despite the fact that most are exempt from the requirement to maintain coverage under ACA.[viii] (IF the assumption were true, Florida would be required to contribute approximately 8 times more state matching funds for an “already eligible” recipient than a “newly eligible” one over the first decade after expansion.)

According to Florida Center for Fiscal and Economic Policy, “Under reasonable assumptions, however, the state’s share of the Medicaid budget would increase by less than 2 percent over the ten-year period, including costs associated with covering both already eligible and newly eligible Floridians. In fact, after factoring in reductions in costs associated with providing uncompensated medical care to the formerly uninsured, Florida taxpayers should see a net savings as a result of expansion.”[ix] Additionally, the Federal government is covering 100 percent of the costs of Medicaid expansion through 2016 and will still cover 90 percent of the costs through 2020 and beyond.[x] This means that Florida’s contribution through 2022-23 would be 4.6 percent of the total for an average of $67 million per year. This represents a small fraction of one percent of available state general revenue.[xi]

But what about the part about businesses? Surely it will cost businesses more.

Not so fast. Because Florida’s economy is service industry dominated, Medicaid expansion would provide a significant and disproportionate benefit to businesses, both directly and indirectly. In particular, employers with low-wage workers who qualify for and enroll in Medicaid would receive the direct benefit of fully subsidized coverage (meaning they will pay nothing) for health insurance coverage for their employees and they will receive indirect benefits associated with those employees having continuous access to timely and affordable care (e.g., reduced absenteeism due to illness and turnover). Under the expansion, a half-million low-wage workers would gain coverage within a few years. Because this coverage provided through Medicaid is a fully subsidized employee benefit, it is valued at an estimated $14.3 billion over 10 years. (cite) This is like giving businesses a huge tax break.

Medicaid expansion is also good for the economy in general. For each dollar Florida spends in the first ten years, there would be an additional $9.51 in federal funding, directly stimulating the economy and creating an estimated 65,000 private-sector jobs in the first six years alone.[xii] This means that by 2022-23, Florida could receive about $20.3 billion in additional federal Medicaid funds. These dollars represent tax dollars paid by Floridians through federal income taxes that won’t be diverted to other states.[xiii]

[viii] With regard to estimates cited and claims made in this paragraph, See FCFEP, Overstated Burden: Why Florida’s Claims Regarding Medicaid Expansion Are Vastly Inflated, Lacking in Merit, March 2012

[xii] With regard to estimates cited and claims made in this paragraph , see FCFEP, Rejecting Medicaid Expansion Not An Option for Florida, July 2012