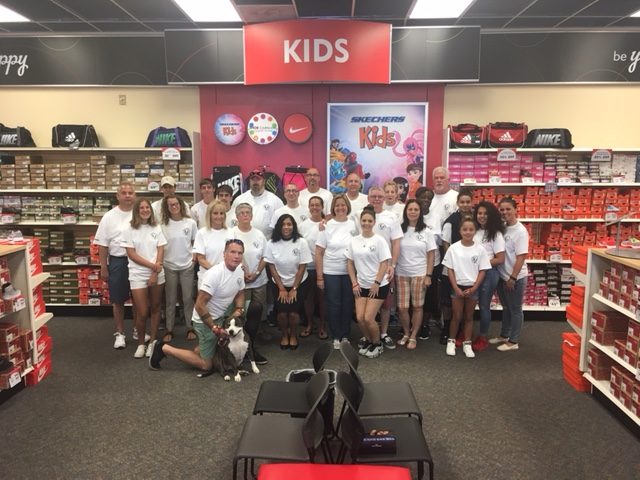 Daytona Beach, FL – While many were on their way to enjoy the sun and sand in Daytona Beach on a beautiful Saturday morning, union members and their families from across Volusia County assembled to ensure the kids from the Florida United Methodist Children’s Home had new shoes and socks to start the school year with.

“[the shoe drive] wouldn’t happen without the volunteers and the donations of hard working union sisters and brothers.”

The event, held on Saturday, July 29th at the Shoe Carnival on International Speedway Blvd, was the first time this charity has expanded in Florida and was coordinated by the United Association of Plumbers & Pipefitters Local Union 295 and the United Craftsmen Children’s Shoe Drive, Inc., a children’s charity organization.

The United Craftsmen Children’s Shoe Drive, Inc. officially took off the ground in 2009 and “has devoted its energy to passionately advocating for children who by no fault of their own live in Children’s Homes and Foster Care.” Founder and Journeyman Plumber Tracy Allen Newsome, having grown up in a “tough situation,” understood that there are many children who often end up wearing hand-me-down shoes that are worn out and often way too small or too big. Tracy began collecting for a local shoe drive in the Atlanta, GA area in 2005.

Tragically, Tracy was killed in a car accident in 2009 on his way home from work at Atlanta Hartsfield Jackson International Airport. After his union co-workers raised $3000 to help his family in their time of need, Tracy’s widow reached out to Bob Carpenter of UA Local 72 to carry on Tracy’s passion for helping children and so began the The United Craftsmen Children’s Shoe Drive (UCCSD).

Since then Bob Carpenter, now the President and CEO of the UCCSD, said they have held shoe giveaways in Atlanta and expanded to Birmingham, AL, Tulsa, Ok and now to Daytona Beach, FL. Bob said he “was hooked from the first event when an 8-year-old boy came to him and gave him a hug and said ‘I’m glad someone out there cares about me.”  Bob continued saying he “had to turn away as the boy walked out to keep from tearing up” and that “many of the children we service have never had the opportunity to come to a store and pick out their own shoes.”

David Fitzgerald, Training Coordinator of UA Local 295 and lead organizer of the shoe drive in Daytona Beach, said “his local wanted to do something for the community and to demonstrate that Labor has a big heart.”  David Fitzgerald, who is also the Vice-President and Director of Operations in Florida for the UCCSD, said this event “wouldn’t happen without the volunteers and the donations of hard working union sisters and brothers.”

Vanessa Lee, a retired teacher of AFT 1605 and volunteer at the event, said that she “is blessed to be able to retire and now she wants to pay it forward” and that the experience was “quite humbling and she’s happy that these children now understand that there are folks in the community looking out for them.”

KC Swank, a volunteer whose family are UA Local 295 members, helped a young woman “named Angel who is turning 13 years old in August get 6 pairs of shoes, tying the record with a Birmingham, AL UCCSD event.”

The United Craftsmen Children’s Shoe Drive in Daytona Beach concluded with 67 children getting new shoes (many able to get multiple pairs), socks and a Chick-Fil-A lunch. The organizers and volunteers look forward to growing the event in Daytona Beach and expanding to other cities across Florida.